Automation is the answer to regulating even relatively complex business development workflows. It allows you to set off a customized sequence of actions — from sending follow-ups to creating tasks.

Contacts Enrolled for a Second Time

Automation Types and Use Cases

from this page, you can either choose pre-built automation or you can choose Custom automation.

Enter the Automation name and goal under description.

Link a List or a Segment to this Automation to run on.

You'll find a set of pre-built automations, each one tailored to a special use case.

Note: Our ready-made automation has also have ready-made email templates inside the Send Email step, which you can always edit to add your business logo, keywords and customize it to suit your business needs. 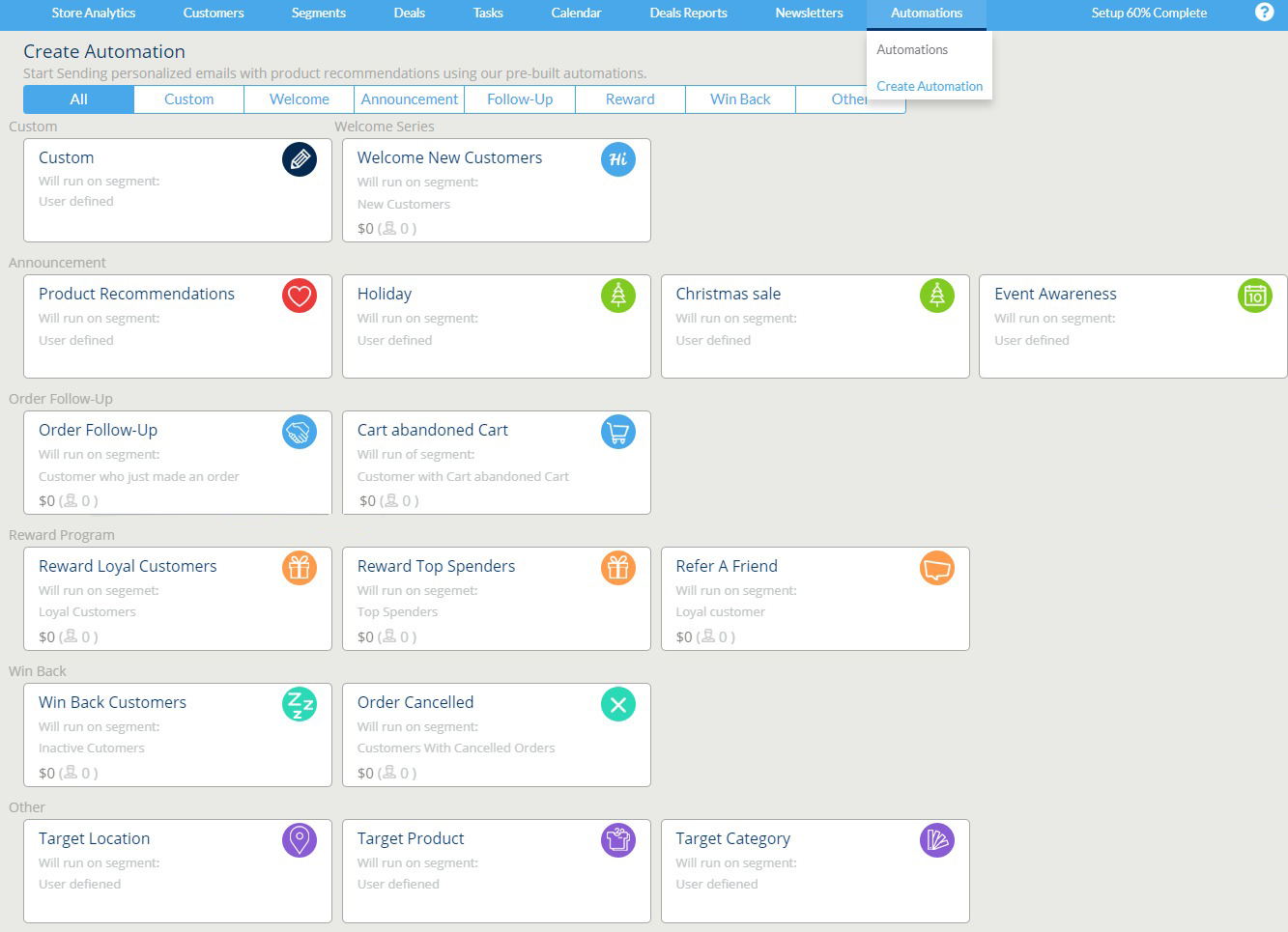 Adding a Segment to Automation: Segments are dynamic, contacts are added or deleted automatically based on updates coming from different sources. This means it will automatically enroll contacts in the Automation when they're added to the Segment. And contacts that no longer in the Segment, will drop out of the running Automation.

Contacts Enrolled for a Second Time

Let's say you've created an Automation for following up with customers after they've placed an order. A customer who have purchased once will be automatically enrolled into the Automation.

So by clicking Yes in the box in image below, you're indicating that if a customer matches segment conditions for a second time, he will be enrolled again to the same Automation. that way, whenever a customer places an order, he will always get a follow-up/confirmation message.

Automation Types
There are two types of Automation in Revamp CRM: Standard and Date Based. Standard Automation differs from Date-Based ones in that the latter is restricted to a certain day or event such as a holiday, an event, anniversary or a customer's birthday. The row pointed at in the image below consists of the Date Based Automation Templates while the rest are all Standard Automation that works by tailoring appropriate time-delays in the process required.

You can find them by navigating to Automations > Create Automation

Use Cases
Because we offer different actions that could be applied on a segment or a list of contacts through Automation, You can use Automation steps and actions for example to create:

Business Process Automation: You can assign contacts, tasks to team members based on each contact response to marketing efforts for example.

Lead Nurturing Automation: You can connect leads coming from web forms and start qualifying them by Adding score, Subtract from score, move to another list, add tags, create notes and more to turn your leads into actual prospects and then paying customers.

Drip Marketing Campaign: You can schedule a series of emails, automate an immediate email for a new lead or a customer perhaps. and choose when to send the next email. Or choose the next action based on a contact response to each email.

You choose a Central Date and all automation steps will run around the Central Date. For example if you have an event that will take place on October the 5th. You set your central date to be October the 5th. and you will be required in each step to set trigger by number of Days/Hours Before/After the event date. 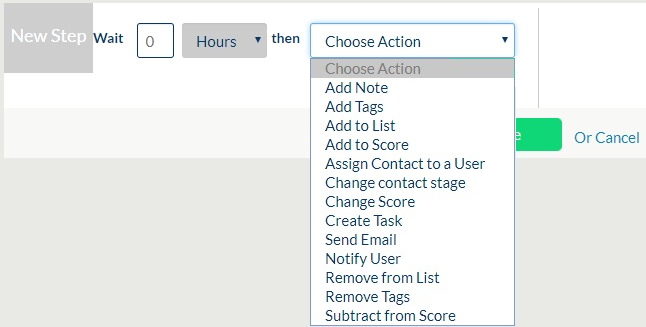 Running: Is an active automation.

Draft: You can create an automation and don't press the start button until later on.

Expired: when you create an Automation, it's optional to choose an expiration date. When the date comes, Automation will automatically stop and no steps will be running anymore.

Is an Automation the same as an email drip campaign - AKA Email Marketing Automation?
An Automation can be used to create an email drip campaign into which you can enroll contacts so that they receive pre-written email templates at preset intervals. However, you can also add non-email steps (like Tasks) to an Automation.
Is there a limit to the number of steps an Automation can have?
No, you can add as many steps as you need.
Can a contact be in more than one Automation?
Yes, a contact can be in more than one Automation at a time.
How can I set it so that an Automation is triggered automatically for a new lead?
Create a List/Segment for new leads and attach that List/Segment to the Automation. Set the first step in the Automation to be triggered after 0 hours. Any time you place a new lead into the new leads List/Segment, the lead will automatically be enrolled in the Automation.
How can I trigger an automated, immediate email for lead follow-up?
Create an Email Template. Create an Automation where the first step has a delay of 0 days and select Send Email as the action. Select the Template you created for immediate lead follow-up. Set a specific send time if desired.
Can I create an indefinite Automation that repeats monthly or annually?
Yes, you can create an Automation with no end time. That will run until you manually press pause or stop.
Can I use an Automation to send a monthly newsletter?
There are two ways to send a monthly newsletter.
A) From the top menu bar go to Newsletters. Create a single Newsletter/Email one every month, schedule each newsletter to be sent on a specific day from each month.
B) Create an Automation with as many steps as you want. Set the action for each step to be "Send Email". First step time delay could be set to 0 Days. After step one, you can set the delay between every step to be 30 days.
Is there a limit to the number of emails an Automation can send each month?
Yes. For all plans in Revamp CRM, there is a limit to the number of automatic emails that can be sent per month. This limit varies by plan.
Check out this article for Marketing FAQs and purchasing more email credit.

From the Automations main screen, the Automation card gives you a quick insights about status, who created the Automation, How many contacts are enrolled, how many emails are sent. clicked and opened. 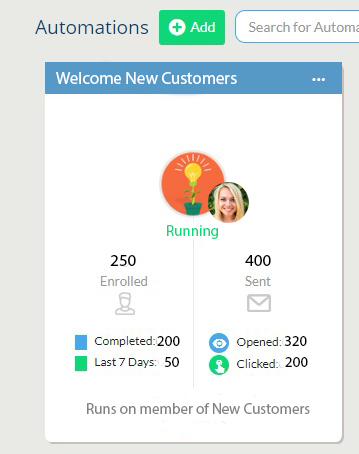 For a detailed report for each step of the Automation, open you Automation page. 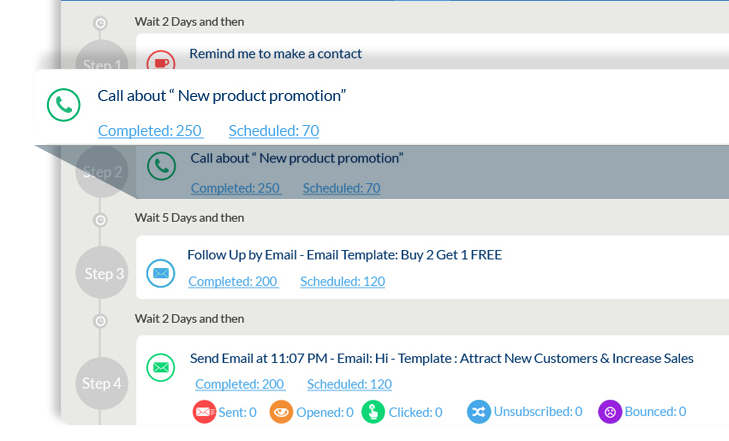