Revamp CRM provides you one of the most useful tools that will help you handle your deals efficiently in no time, so you can:

What's on the Deal Card?

How Can I See My Lost or Won Deals?

What are Rotten Deals?

This view lists all  Deals in a List View compiling all information. In the list view, you get to export your Deals and view Deal’s probability and forecast sale.

You get to filter your List view to show:

You can then export deals into Excel or CSV sheets.

Evaluate your team performance and know how well your sales processes are moving on. 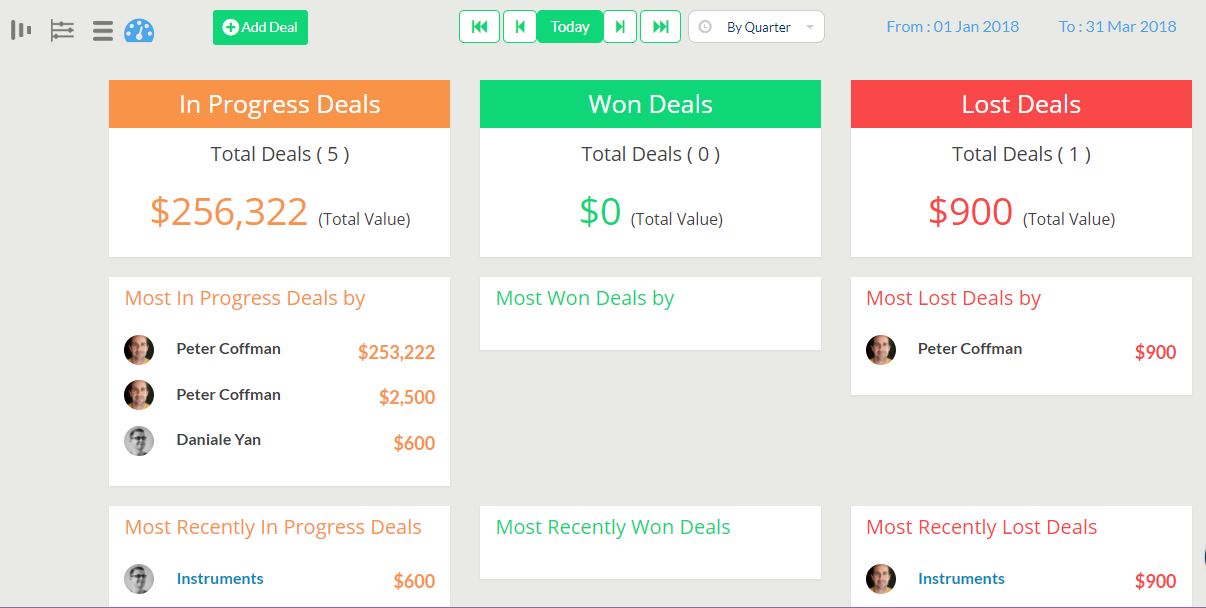 You can manage your multiple sales pipeline and stages as indicated below:

You can select the currency to be used for each deal. 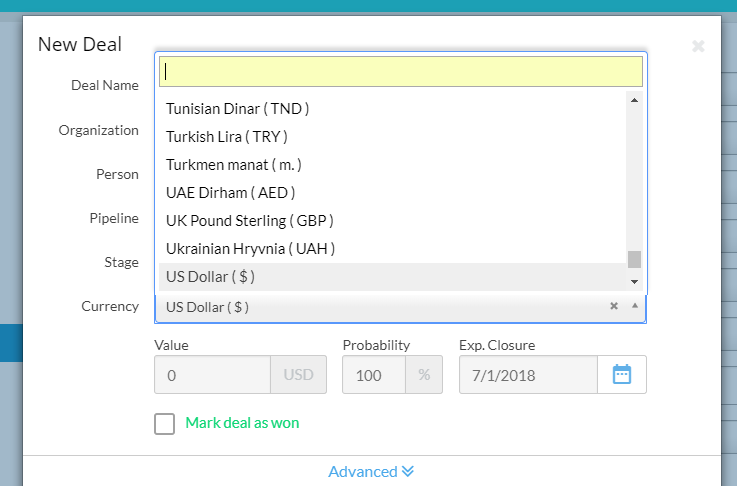 An email can also be attached directly to a deal profile via the deal smart email. Simply copy the deal's smart email (which is a unique per deal) and forward the email to this email address and it will be attached to this deal. 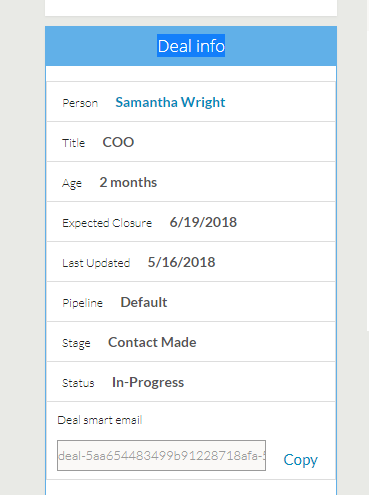 Note: Tasks already on the deal will not automatically be re-assigned when you change the owner of the deal. If you need to re-assign the tasks you would need to do that manually.

To reassign a deal to someone else, go to Deals > Choose a Deal > click the black arrow icon next to the deal name. 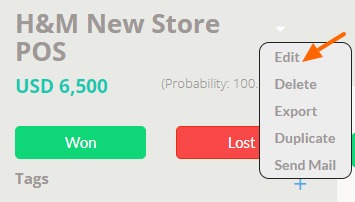 a Pop-up will appear, click on Advanced and select the new owner and save. 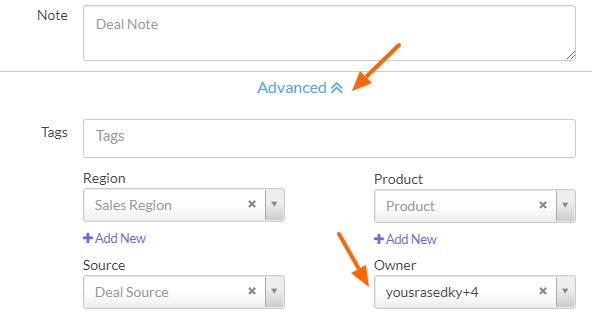 What's on the Deal Card?

You can find the user image on the Deal's card, this way you can know who's on your team has the most won, lost or in progress deals at a glance. Also, you can find contact name related to that deal is clickable so you can open contact card that has quick details about contact deals history. and you can open contact profile for more details.

Actions on deal's card can be reached when clicking on Task. You can Add Note, Send Email, Add Tag , Add Task and Edit Deal without leaving the Deals Pipeline view.

How Can I See My Lost or Won Deals?

Revamp provides you with different deals views. We also allow you to show only the  won, lost or in progress deals on every view "Pipeline view, Timeline view, List view, and Deals Dashboard". Just click on the Deals menu.

Click on the drop-down menu in the image below, you can choose from Won, Lost or In Progress

What are Rotten Deals/Deal Age?

Rotten Deals are deals that have been open for more than a certain amount of time. You'll be able to tell a Rotten Deal straight from the Deals Pipeline by the red "rotten" icon on the left of a deal's name.

You can specify the time after which a deal goes rotten, by going under Settings > Sales > Deal Age.

Revamp CRM offers you Advanced filters to sort your Deals and easily manage them.

Go to Deals and click on the Green Filter Icon on the top right side.This menu will appear allowing you to filter  Deals by: 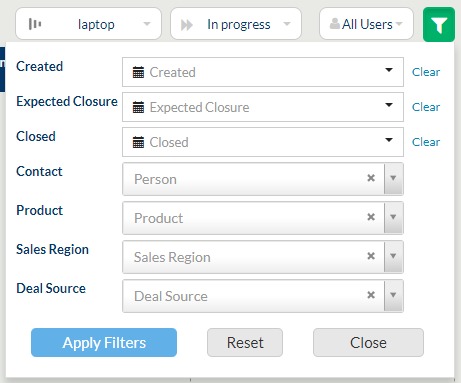 To export filtered deals, from the different Deals Views, choose the List view.

Choose which format you want your deals exported into, you can export deals by two formats (Excel or CSV). A file with all your deals will be downloaded.

Who Can Export Deals : Only Roles (Owner , Admin and Manager) can export deals.

Deals regularly come with custom deal stages, which are used to visualize sales pipeline and to estimate future revenue. Revamp made it easier for you If you already have deals. You can import them by clicking on  import deals, as indicated below:

It's recommended to first read our pre-import check list article.

You can find out your deals source, Click the Gear Icon next to your profile picture. From the list on the left, click on  Deal Source. Add the source you want then it will appear in the deals tap inside every deal info. Click Save.
You can do the same for Product & Region.

Account notifications (under Settings) to control which reminders are sent to your account users. We offer you several ready-made reminders to select directly from. 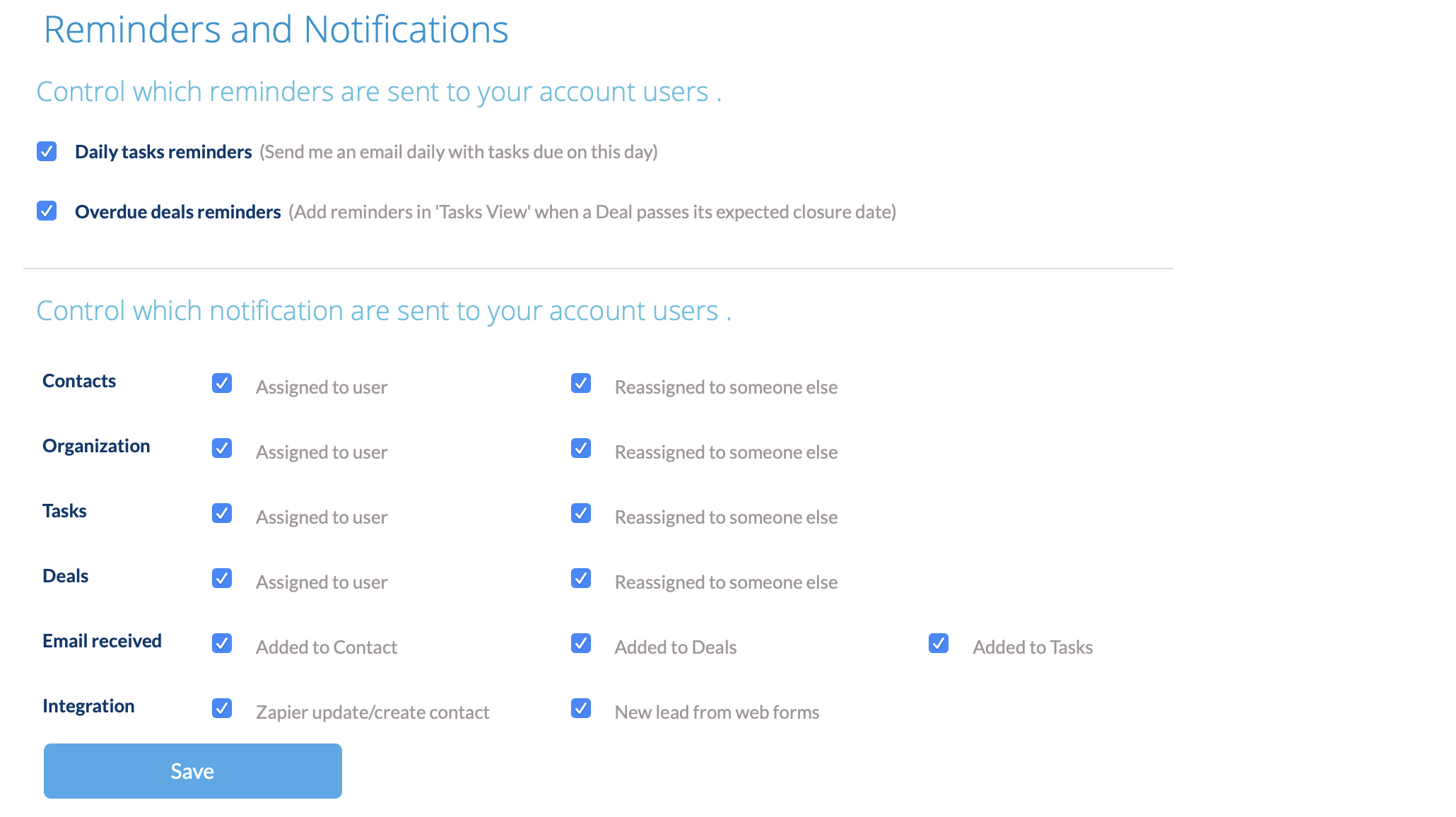